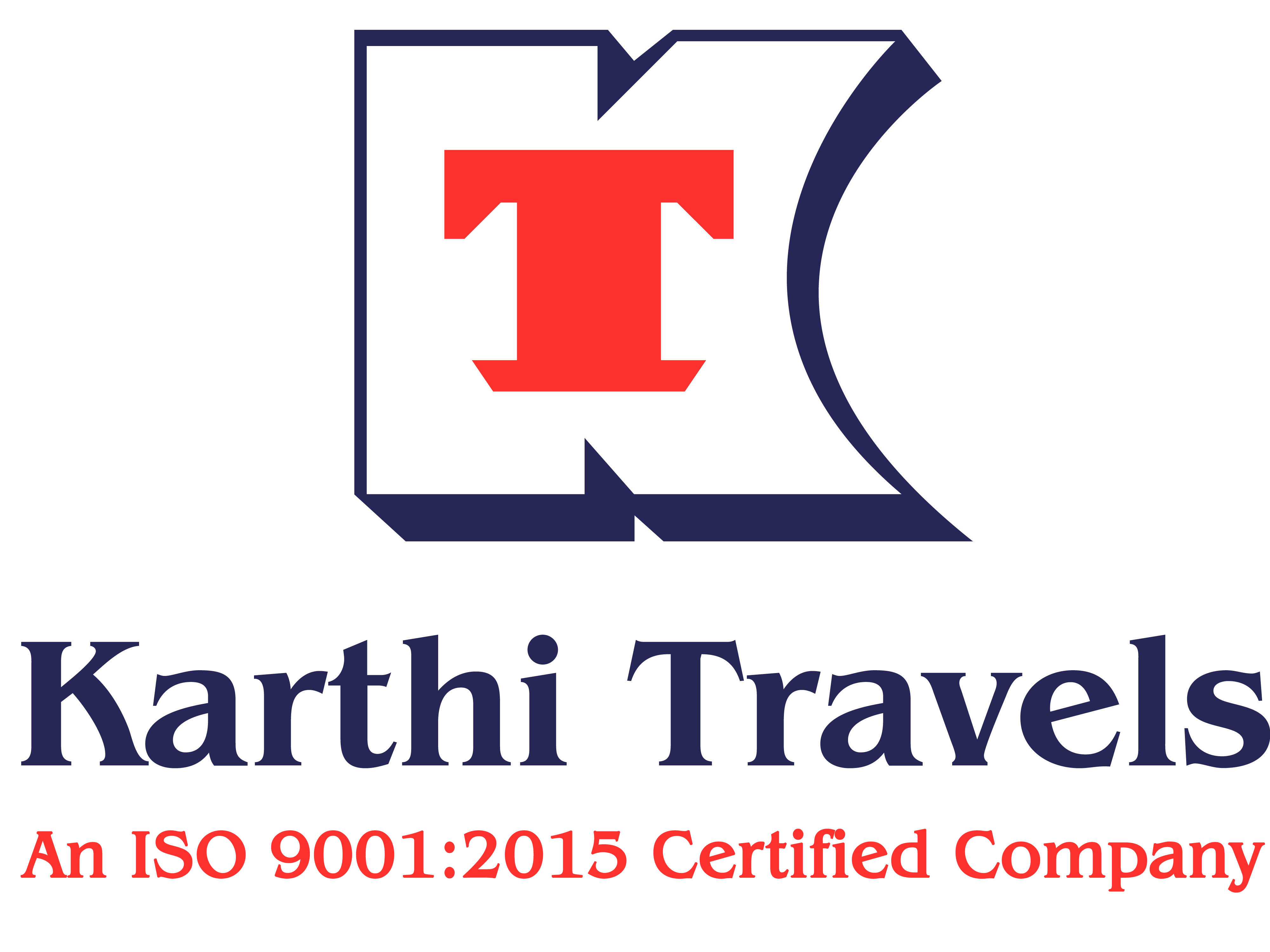 Ranipet to Coorg Cabs and Vans

Avail Ranipet to Coorg car hire and van hire services at Karthi Travels and enjoy a great trip with family and friends.

Make the best use of the services offered by Karthi Travels at the best rates & experience the relaxing and trouble free journey by hiring Ranipet Coorg or Katpadi Coorg taxi at Karthi Travels. With over a decade of experience in car and van rental services, Karthi Travels is the best cab service provider in the industry, if you are planning to book a taxi.

We also launch few offers during certain seasons and holidays. We try to provide you excellent deals from time to time to help you travel in the cheapest possible fares. With our user-friendly website, you can book taxi online in a few simple steps and avail hassle free car and van rental service. Travel from Ranipet to Coorg with Karthi Travels and have a pleasant journey.

At Karthi Travels Car and Van Rentals, you will get many options of car types and travellers to choose for hiring a taxi from Ranipet to Coorg. Some of the popular car models include Indica, Etios, Innova, Traveller and many others. The table below highlights the various car model options available which you can choose for Ranipet to Coorg cab booking.


With our well-mannered drivers and great fares, we promise you a wonderful journey. For any further details on Ranipet tp Coorg car and Van rental, please call us on +919655502002.

At Karthi Travels you get the best deals for your Ranipet to Coorg cab tour. The cab tour at Karthi Travels is sure to be affordable for you. You can avail the tour depending on the itinerary available.

We pride ourselves on transparency. With no hidden charges, great cab service at very affordable rates, we offer you the best prices as compared to any other player in the industry. Karthi Travels believes in making travel extremely convenient for customers and we fully understand that the Ranipet to Coorg cab fare is an important parameter when you make the decision to book a taxi.

Your Ranipet to Coorg taxi fare will never be a burden on your pocket. You can contact us on +919655502002 for any enquiry or to get more details on Ranipet to Coorg cab fare. We will also help you plan your trip in the most efficient way possible.

1. Affordability: Karthi Travels is the best car and Van rental provider in Ranipet, if you are looking for an affordable taxi fare from Ranipet to Coorg.
2. Courteous Drivers: We promise to provide you reliable taxi service with our professional drivers.
3. Timely Availability: Karthi Travels always guarantees timely availability of taxi service.
4. Services across Ranipet: With excellent services for cabs from Ranipet to Coorg Karthi Travels's operation is available across all major towns in and around Ranipet.
5. Wide Range of Cars: You can choose a taxi or Van from a wide range of cars and Vans like Indica, Tavera Sedan and Traveller.

Karthi Travels’s continuous focus on complying with customer demands and travel needs have positioned us as a true customer-centric player in the road travel/tourism sector. In order to make customers outstation travel truly memorable, we offer several Ranipet to Coorg cab and Van tours. Our website is continuously updated with the new seasonal tours that are launched. You can also call us to explore the various tour from Ranipet to Coorg. After choosing any of these tours from Ranipet to Coorg, you can be assured that you are getting the most efficient rates, the most courteous and experienced drivers as well as Karthi Travels’s guaranteed service levels. Customers are provided with options for one way, single day as well as multi-day car and Van tours from Ranipet to Coorg.

Kodagu is an administrative district in Karnataka, India. Before 1956 it was an administratively separate Coorg State, at which point it was merged into an enlarged Mysore State. It occupies an area of 4,102 square kilometres (1,584 sq mi) in the Western Ghats of southwestern Karnataka. In 2001 its population was 548,561, 13.74% of which resided in the district's urban centres, making it the least populous of the 30 districts in Karnataka.

Kodagu is known for its coffee and its people. The people include indigenous (Kodavas) and other ethnic groups (Arebashe Gowdas and Kodava subgroups). The chief languages presently spoken in Kodagu are Kodava, Are Bhashe, Tulu and Malayalam. Kodagu is home to the native speakers of the Kodava language. 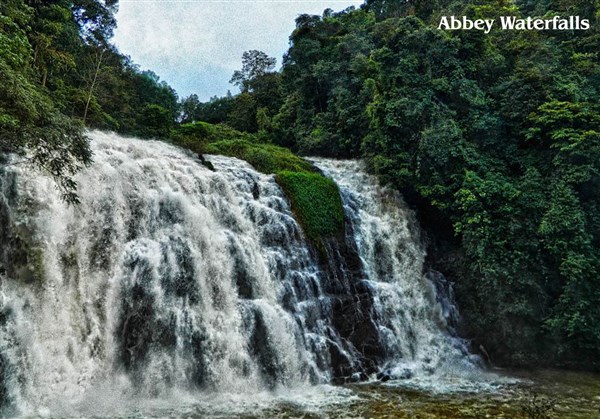 About Abbey Falls
Abbey Falls (also spelled Abbi Falls and Abbe Falls) is in Kodagu, in the Western Ghats in Karnataka. It is located 8 km from the Madikeri, 122 km from Mysore, 144 km from Mangalore and 268 km from Bangalore.
The river is part of the early reaches of the river Kaveri. Flow is much higher during the monsoon season.
The waterfall is located between private coffee plantations with stocky coffee bushes and spice estates with trees entwined with pepper vines. A hanging bridge constructed just opposite the falls.
The falls was earlier called Jessi falls, named after a British officer's wife. However, the place was a thick jungle area back then. Years later, the waterfall was discovered by Mr. Neravanda B.Nanaiah who bought the place from the government and converted it into a coffee and spices plantation that surrounds the waterfall today. 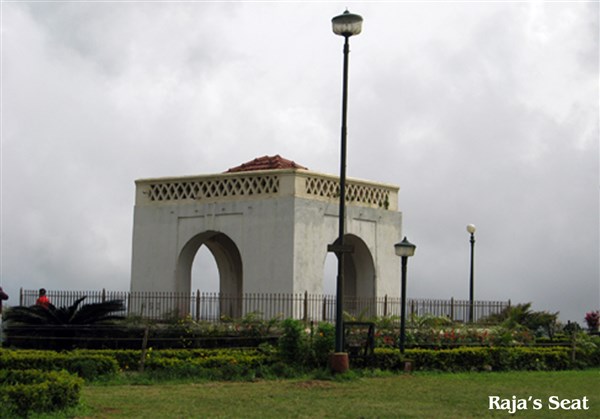 About Raja's Seat
Raja's Seat (Seat of the King) is a seasonal garden of flowers and artificial fountains. It is one of the most important tourist spots in Madikeri of Coorg District. It is 270 km away from Bangalore, the capital of Karnataka.
A pleasant spectacle of refreshing layers of greenery, chain of high and low-rise-mountains attired with mist, the Raja Garden was a one-time-favorite of the kings of Kodagu who used to watch the setting sun, and spend time with their queens here. It is shaped like a small square in brick and mortar, with four pillars bridged by arches, enhanced by beautiful surroundings. This lovely spot was a favorite place of recreation for the Rajas and hence was permanently associated with them. It is built on a high level ground with a commanding view of the cliffs and valleys to the west. Early in the morning as the sun is just rising in the east, the mist shrouded valley below offers a rare sight. The golden light of the setting sun is a splendor to watch. There is also a Toy Train for children. 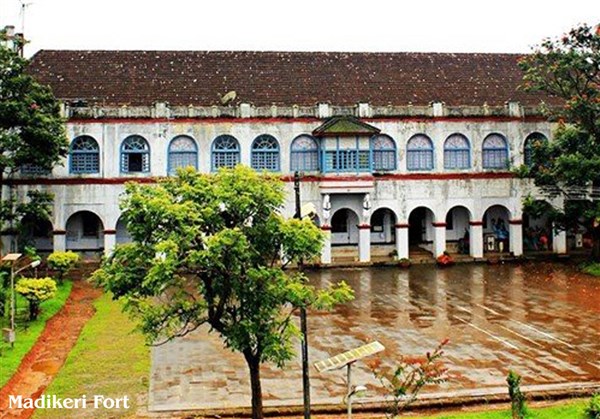 About Madikeri Fort
This 19th century fort, in the centre of Madikeri, houses a Ganesha temple, a chapel, a district prison and a small museum. The fort offers a beautiful view of Madikeri. This fort is one of the most beautiful places to visit during the trip to Coorg. Initially this fort was built by mud and later on mud was replaced by the concrete stone, by the great king Tipu Sultan.
According to an official explanation board at the site, Mercara, the headquarters of Coorg or Kodagu district, was founded by Prince Mudduraja of the Haleri Dynasty in 1681 CE, and was named after him as Muddurajanakeri -- which became "Muddukayray" and Madikeri over time. The British termed the place Mercara. About Bagamandala
At a distance of 39 kms from Madikeri, 8 kms before reaching TalaKaveri, Bhagamandala is on the banks of the confluence of three rivers, Cauvery, Kannike and the sub terranian Sujyoti, popularly known as "Triveni Sangama". The famous Sri Bhagandeswara temple is located on the bank of the river over here. Pilgrims visiting Bhagamandala bathe (or sprinkle water on your head) in the Triveni Sangama, confluence of rivers and worship at the temple complex. Watch out for the wooden carvings in the temple. The subrahmanya idol in the temple is a swayambu and the temple was established by a rishi named Bhagamandala. The temple serves free lunch - you get rice, sambar and buttermilk. Not a lavish lunch, but a clean,simple vegetarian option instead of the poorly maintained restaurants in the neighbourhood 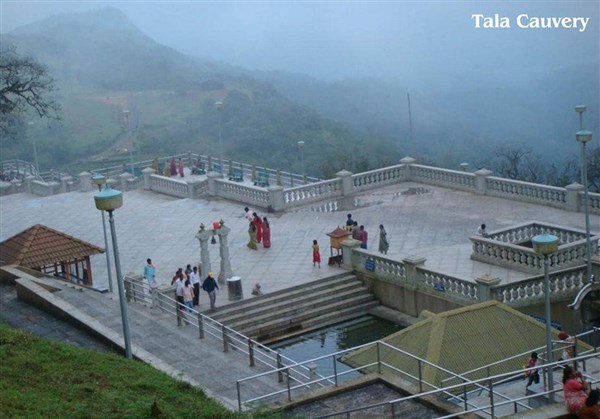 About Talacauvery
River Kaveri which is one of the 7 sacred rivers of Sapta Sindhus of the Hindu scriptures, originated at a place is called Talakaveri (head of Cauvery) in the Brahmagiri hills, at about 4,500 ft above sea level. This place is marked by a tirtha kundike or Brahma kundike (small spring/pond) from where the river emerges as a small perennial spring, but flows underground again to emerge a short distance away. It is about 48 km from Madikeri.
There is a shrine near the kundike and a big tank in front of it where devotees baths before offering prayers. There are 2 temples, a Shiva temple and with a rare and ancient Shiva Linga, and another temple dedicated to Lord Ganesha. This temple has a holy Ashwantha tree where, according to legend, the Trimurtis - Brahma, Vishnu and Mahesh gave darshan to sage Agastya

About Iruppu Falls
There is a sacred spot called Iruppu in south Kodagu on the Brahmagiri range of hills. River Lakshmana-tirtha flows nearby. Legend says that Rama and Lakshmana, warrior Gods, passed this way while searching for Rama's consort, Sita. Rama asked Lakshmana to fetch some drinking water for him. Lakshmana shot an arrow into the Brahmagiri hills and brought into being river Lakshmanatirtha. Also the river is said to be blesed with powers of cleansing one's soul, it is an important pilgrim point for many devotees and a temple dedicated to Lord Ram is a few km below. 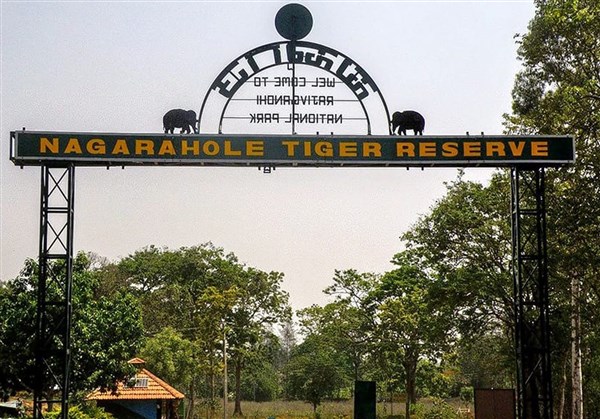 About Nagarhole National Park
Nagarhole, in kannada means Snake River, but there are not too many snakes at this place. This park was created by former king for their hunting adventure. Nagarhole provides best natural habitat for different wildlife animals like tigers, elephant, panthers and many more. Mostly found animals here are wild dogs, gaur, langur and deer.